Western governments must show solidarity with Iranian human rights activists and not abandon them for the sake of commercial activities with a regime that has abysmal record on human rights, anti-compulsory hijab campaigner Masih Alinejad, said at an panel for members of the Swedish Parliament.

Speaking alongside Javaid Rehman, the UN special rapporteur, Alinejad, the founder of My Stealthy Freedom/White Wednesdays campaigns against compulsory hijab in Iran, condemned the election of the Islamic Republic, in a secret ballot, to UN’s Commission on Status of Women, which works to be the global champion for gender equality.

“A regime that doesn’t allow its women to make decisions for their own body has been elected by UN to its top body to monitor condition of women globally,” Alinejad said. “This is an insult to Iranian women who are in jail & to millions of others who get beaten up by the same regime”

Alinejad urged the EU to Islamic Republic to give a true accounting of the events surrounding the November 2019 protests during which the security forces killed more than 1,500 protesters. The Islamic Republic is just like the Islamic State, Alinejad said, resorting to brutal force to enforce a religious dictatorship.

“How can you reform ISIS”, she said. “The Islamic Republic has many characteristics similar to ISIS. Just like ISIS, it kills dissidents, takes dual nationals hostage, flogs people who don’t practice Islam, is the biggest enemy of women, issues fatwas on dissidents and many more.”

Alinejad said she was in touch with tens of mothers who had lost their loved ones during the protests. “If your own children were killed by an oppressive regime for the crime of protesting, what would you do?” she said. “Would you shake hands with the killers of your children? Would you negotiate trade deals with them?”

At an event at the Swedish parliament, along with Dr. Javid Rahman, the UN special rapporteur, Masih Alinejad the founder of anti compulsory hijab movement in Iran, condemned the election of Islamic Republic of Iran to UN’s commission on the status of women.

White Wednesdays activist Saba Kordafshari, has been temporarily released from prison on a furlough together with her mother, Raheleh Ahmadi.  Based on reports, Kordafshari had to post a 2.2 billion Tomans (around $500,000) bail to be granted a furlough.

Tehran Revolutionary Court had sentenced Kordafshari in 2019 to a total of 24 years in prison for demanding an end to compulsory hijab laws, including 15 years a on charges of “spreading corruption and prostitution and walking without a veil.” She had received 7.5 years on “national security” charges for removing her headscarf in public and the remaining 1.5 years for creating propaganda against the regime.

Ahmadi, was released on furlough on March 14. Shei had been arrested in February 2020 for having opposed the unjust sentence meted out to her daughter.

Kordafshari and her mother were part of a group of women, including Yasaman Aryani, Monireh Arabshahi and Mojgan Keshavarz, that created a video opposing compulsory hijab in 2019. The women had handed out flowers to women in Tehran metro. The security forces arrested everyone affiliated with the campaign on the same day.

Women of #WhiteWednesdays in Iran are still in prison. By removing their compulsory hijab, they had produced this awe-inspiring video on women’s day on Tehran’s metro. They were calling their sisters to band together, regardless of whether they wear hijab or not.

In spite of being sentenced to long prison sentences, they don’t regret their heroic act. Don’t forget their names and help us raise awareness for their release Yasaman Aryani Monireh Arab-shahi Mojgan Keshavarz Saba Kord-Afshari Raheleh Ahmadi They’re Iran’s Rosa Parks And here is a message from these two brave mother and daughter from prison for #InternationalWomensDay 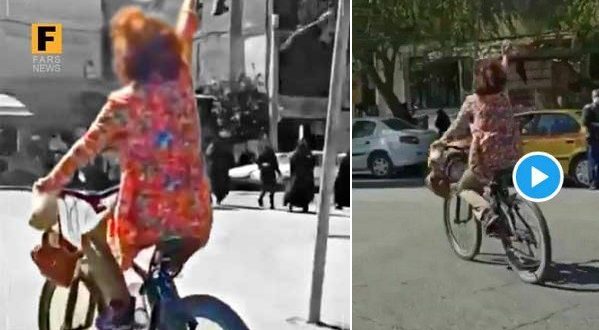